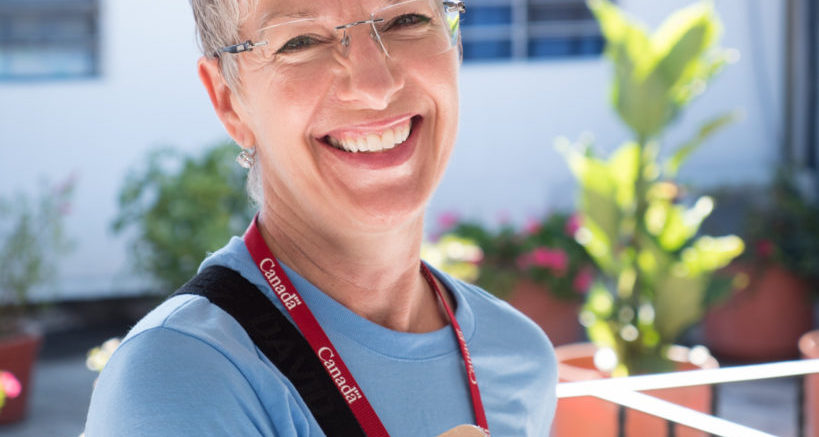 “By 1991 we quit our jobs, we bought a Volkswagen Westfalia, and we went from Saskatoon to Vancouver to get our sailing certification.

“Then we drove all the way down through Baja, California, right down to Cabo San Lucas. Camping all the way. And then across to Mazatlan. We did seriously look into Los Cabos, but the prices there were starting to get where we couldn’t do it. So, back across over to Mazatlan it was, and up through Grand Canyon and back to Saskatoon. “

“What year was your Westy?”

“… and then we returned, we didn’t quite find what we wanted. We also found out we needed a bit more money. So, we flipped a couple of houses in Saskatoon. We were both working and then nights and weekends we worked our butts off on the houses.

“And that first winter, when we got back, we went up to Candle Lake because we had nowhere to live. We lived in a cabin there. It was warm enough but it wasn’t totally winterized. So, we lived with a wood stove and a fireplace. And plastic bags in the toilet bowl.”

“That is amazing for being in Saskatchewan.” (Saskatchewan easily reaches below -30C in the winter.)

“Yeah. We would go out, we had a hole in the ice to get our water. We would pull our buckets up and we would cook with the water. There was electricity, though. And we had an electric blanket on the bed.

You know, that was one of the best times. That was more than a year we lived like that.

It was warm enough. There are always ways to make things… I, built this wooden thing. We went out and cut trees and chopped wood. I set up a quilting rack. I had never quilted in my life. But I made this great big quilt that winter. Sitting by the fire, and just stitching… oh…

“I bet you have very fond memories from that period. Times like that are what usually sticks with you.”

“Oh, I do, I do. We had friends around. Sometimes we would jump on the snowmobile, and ride across the lake to a bar. Enjoy other people, play pool, have drinks, and socialize.

I wish more people were able to, just to have… you know, people would always say ‘Oh, you’re so lucky!’

“Yes! That drives me nuts!”

“You know, people see photos of us going places in our ‘69 VW Bus and say the same thing. ‘You’re so lucky.’

“Well, it’s not my problem you need a tour bus to feel comfortable. I bought my Bus for $3000, and I work on it. All of it is conscious decision and sacrifice. The only luck in it is not dying in a random accident. And that’s as much luck as anybody who is alive has.

“Yes, 1991 into 1992. And then it took us from early ‘92 to ‘94, we traveled every year for a couple of weeks. Looking. Then we finally find this piece of property in Belize. And it was three hundred feet of beachfront property. Beautiful. It had been cleared but thirty years before. So we cleared that and… opened a hotel.”

“How long did you have that for?”

“Five years. The plan was always to build it, develop it… and sell it. There was no electricity in the area. We set up generators, septic systems… it was how we could afford it. We put every penny we had into it.”

“Yes it was. For the most part. There were times when it was really hard.

“It was called The Green Parrot. It’s been sold a couple of times but I understand it still exists. A short time after we finished, we had two baby green Parrots brought to us. So we named them Jupiter and Stupider. ” *laughs

“And what is it about Antigua?”

“There is a special energy. Do you feel it?”

“Yes… well, ok… last year, I was really busy, right? I would work. I was up until 1:30am and then get up at 5am. And it was constant, every day. I had to keep going. So I met people and I got to experience it but there was always this dark cloud of stress above me.

“Then Janet came and we had a week off so I got to feel it a bit. And when I went back to Vancouver friends asked me if I would move here. And I was like ‘I don’t know, I’m not sure it’s my kind of thing. It’s nice but… I don’t know.’

“And then this year, I came back with a different assignment. And I don’t know if it’s because I know people, or because I’m familiar with the place, or because I’m less stressed, but it… it just felt really good. For the first several days I was in such a great mood.”

“There is a positive energy here. I can go to Guatemala city and when I come back, when I start coming down the valley, I feel the sense of peace coming over me.

There was a study done years ago on happiness and Guatemala was rated number five.

“Really? Well, it’s confusing. Because I’m very well aware it’s a dangerous at times. I can see the guards with shotguns. But, yet, it feels peaceful. It’s the weirdest thing.”

“Yeah, I know. I love that I live in a small town. I live where people are friendly. And welcoming.

I wouldn’t live anywhere else.”

Colleen Fleury is our In-Country Coordinator. Since she came on board, the smoothness and efficiency of everything we do at Las Obras hospital has been greatly improved.