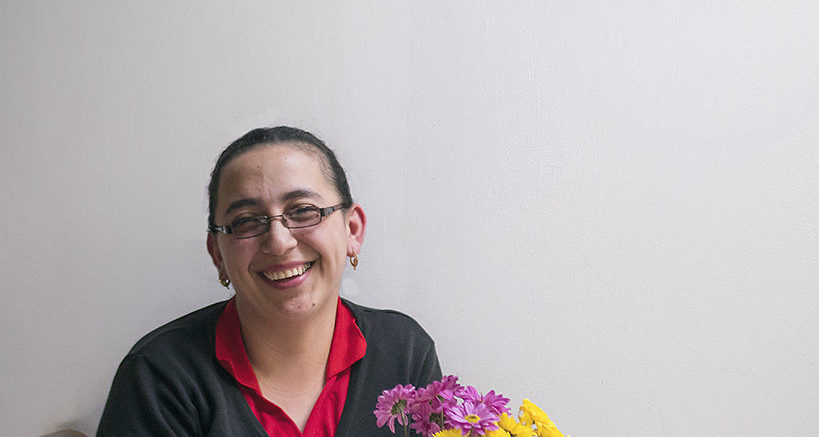 Flor: This is my first time here.

Flor: Yes, I have seen the place but I’ve never come in.

The Union cafe is less than half a block away from Las Obras hospital. It’s one of the many quaint establishments Antigua is generously adorned with. The tiny main level with a short bar and a couple of stools is what most people see. But climbing the steep and narrow stairs in the corner leads to the attic, a relaxing gem I came to know not many realized existed. With its bare Spanish roof tile slanted ceiling, it is a quiet haven away from the noisy cobblestones around the hospital. This year it has become my go-to place to work since the jarring fluorescent lights of the hospital’s muggy, windowless lunch room were not exactly stimulating to writing anything worth reading.

Flor, Karla and I settled around the table to chat and have a coffee. Flor Moran works in the administration of the hospital and she is instrumental in making sure that every triage at Las Obras runs smoothly. Karla was interpreting for us.

Flor: Thank you(*laughs). Likewise. You always bring so many specialists that we need. The number of surgeries that you perform at Las Obras is incredible. There are very few groups who can match that. It’s only Canada and Spain who do this much.

I have been working in this office for 3 years, and I’ve had the opportunity to see how things change during triage. My triage work is voluntary. (* H4H triage happens on Sundays)

Flor: Yes, I do that to support Colleen. Of course, the rest of the week I support her as well through my regular work.

EB: That must be difficult.

Flor: Yes. Sometimes I have to split myself in two to be able to get it all done. Colleen and I start working together in August or September to prepare.

EB: You always seem very busy in the triage area. I was there last year with the camera and you seemed super busy.

EB: Everybody raved that triage ran much smoother compared to the previous years.

Flor: It’s probably because we started so early. We had the time to figure things out and prepare.

EB: Is there something you would like to change?

Flor: Next year, it will be different. Even when it comes to the physical spaces.

Flor: It’s a big secret. (*laughs) The triage will be on the main floor next year. In bigger and better rooms.

EB: I guess there is more room now that the patients with special needs have been moved to the newly built home – Virgen del Socorro.

Flor: That’s exactly it. That’s why we now have the room. And we are planning to build new ORs in the future.

Flor: Yes, that’s the plan. I don’t know when; we need to get the clinics done first. Little steps. It will take a few years.

EB: I guess we at Health for Humanity need to start thinking about bringing more staff?

EB: So you’ve been here for 3 years. Where were you before that?

Flor: I’ve been working at Las Obras for just over 3 years and before that, I was with my family in Jutiapa.

Flor: About 5 hours Southeast. Close to El Salvador border. I worked at an administrative office there as well. But I actually worked for Las Obras once previously, about 12 years ago.

EB: Why did you come back to Las Obras?

Flor: I moved to Jutiapa to keep my mom company. But I wanted to come back here because I love Antigua.

EB: Are you from Jutiapa?

Flor: No. I was born in Guatemala City. But my parents came to Antigua to live. They separated and moved apart. My mom is in Jutiapa and my dad stayed here. My mom lives alone and my dad is with his new family.

EB: How old are they?

EB: Oh, they are young. Do you have any siblings?

Flor: Two sisters. Both live in Jocotenango (a suburb of Antigua). They both have families.

EB: What do they do?

Flor: They’re working. One in a bakery and the other one at a restaurant as a waitress. They both did want they wanted in life.

EB: How about you? Kids? Family?

Flor: I have a newborn baby.

Flor: Thank you.This is my family(*pulls out a photo on the phone)

EB: So, in Spanish do you say Nasaret or Nazaret? Sounds like an “s” to me. (Karla interjects to explain it’s in between an “s” and a “z”.)

EB: Will people shorten that? What would be a nickname for it?

Flor: I think Nassi. But not like Hitler(*laughs hysterically). “Nassi”, not “Nazi”!

EB: Are you the youngest out of the three sisters? Oldest?

Flor: I’m the first one.

EB: Oldest then. And how was that?

EB: But you’re close in age, are you not?

EB: Oh, yes. That’s almost a decade. I understand because my brother is 11 years older.

Flor: How long have you been working with H4H?

Flor: You guys do a great job. This 13-year-old girl that had the surgery today, she had a huge growth between her upper thighs. She was supposed to have her surgery last week. But because they don’t have any money they disappeared. Colleen and I had to chase her down. H4H told them they would be supported but they left anyway.

EB: But the surgery was done today?

EB: Was Tracy her surgeon?

EB: This seems to happen a lot. People leave thinking they can’t pay afford to pay for something. Last year the same thing happened when Gustavo needed a CT scan. He disappeared because he couldn’t afford it. And we had to track him down.

Flor: Yes, people do. They come thinking they will get their surgery but then when there are additional tests involved, they think they have to pay for that and leave.

Flor: It’s tricky, they get scared and give up. Sometimes, doctors who are more experienced know about this behaviour and will not tell the patients there are additional tests needed. They will go and make sure the test costs will be covered before they let the patient know what’s going on. That helps. Then you have them trapped (*laughs).

EB: If you weren’t working at this job, what would you do? In an ideal world?

I wanted to study to be a nurse, but I didn’t have the opportunity to do it. That’s why I like working in the hospital even though I’m not a nurse.

EB: Would you go to the nursing school now if you could?

Flor: Yes. I would love that.

EB: What would it take?

EB: So, out of curiosity, how much money would you need to be able to do it?

EB: And the school is free?

Flor: Yes, if I went to a public school it would be free.